How to build an accent wall

Scotty and I had been talking about trying to add a board and batten wall to our bedroom for several months now. You know, one of those classic, we should do this DIY to our home one day. But one day quickly turned into weeks and then months and we never found the time to spruce up our sleeping quarters. That is until Rona came calling and offered us a dream collaboration. So here’s how you can DIY any wall in your house and update it with a modern textured look. First up, you must know what kind of design you want to put up on the wall. We found so many great designs on Pinterest. Your imagination can run wild here as you envision how you want your board and batten wall to look and seeing what others have done is a great way to get the creative fires burning.

We wanted something simple and eloquent and so we gravitated to this design that was evenly spaced rectangles painted in a dark colour. Like we mentioned, we chose a 3.5-inch-wide MDF and for our project bought 10 of the 8-foot boards and 3 of the 12-foot boards.

You need to measure your wall first to figure out where the slats are going. There are a couple of things you must keep in mind when you are measuring. Generally, homes and the walls that make them up are not perfect. You must measure the top of the wall, the middle of the wall and the bottom of the wall. The goal here is to find out how much material you will need and how you will plan on incorporating the design on the wall.

We needed to find out how many rectangles would fit up and across the wall while keeping space for the frame. The moulding we bought is 3.5 inches wide and we knew we wanted to frame our wall with a border as well. So, for us, after all our measuring it turned out to be five squares horizontally and four squares vertically.

We won’t get too deep into the details on the exact measurements because every wall is different. We recommend checking all your measurements twice and then writing it all down on a piece of paper so you can visualize and plan what you will need.

Always bring home more wood from the store than you need as you can always bring it back (you never want to run out halfway through your project). We started with the framing of our wall. Make sure the largest boards were cut to the right size and then prepped them for the wall. For our construction adhesive, we used No More Nails glue and applied a strip to the board then pressed it to the wall. We wanted to make sure these boards were very secure, so we also used an air brad gun to put nails into the boards as well.

It is not absolutely necessary to secure the boards to a stud in the wall but we wanted the peace of mind to know it was very secure. So we used a stud finder and made sure that we used nails along those sections (Rob tip: studs are normally 16’’ apart).

Once the frame was up, the next step was to do the vertical slats! We measured once again from each side of the frame to the other and doublechecked our measures to make sure we were on track. We then marked the wall where each of the boards would go, measured the distance between them and when we were satisfied it was evenly spaced started the whole process of affixing them to the wall.

After we finished the vertical boards, it was time to do the horizontal ones (if that’s what your design calls for). We used two spare boards cut to the exact size we needed to evenly space out our squares all the way down. That made our life so much easier by always placing the two boards affixed to the frame above and then affixing the next board just beneath them. A simple trick that saved us a lot of time.

Don’t precut the horizontal boards ahead of time as like we mentioned earlier, not all walls are evenly spaced out. You must measure the width you need each time you are ready to affix a new board and then cut it to the exact size. You are not done yet! You need to put wood filler along the cracks of wherever the boards are meeting. After doing that you need to use caulking along the edges of every board. Don’t over do it here, just a nice thin line to seal the board to the wall. After all of that is dry, it is time to sand. You want to make sure the MDF board is smooth as the next step after this will be painting.

Finally, we decided to prime the wall because the colour beneath our frame was very dark. This also ensured that any extra little holes were filled. We ended up putting two coats of Benjamin Moore’s Regal Selection in an ulti-matte finish. For our colour we went for Pacific Sea Teal. If your local RONA store doesn’t have the Benjamin Moore brand, we suggest SICO paint and Labrador Sea colour. You can also use the colour selector by SICO, to choose, online, the desired paint colour and finish.

To see the full video of the project, click here!

Amanda Weldon
Content creator
Amanda is a presenter and content creator for The Weather Network and The Toronto Marlies. She is also the manager of a personal lifestyle blog, Below the Blonde. Catch her on Instagram @belowtheblonde. 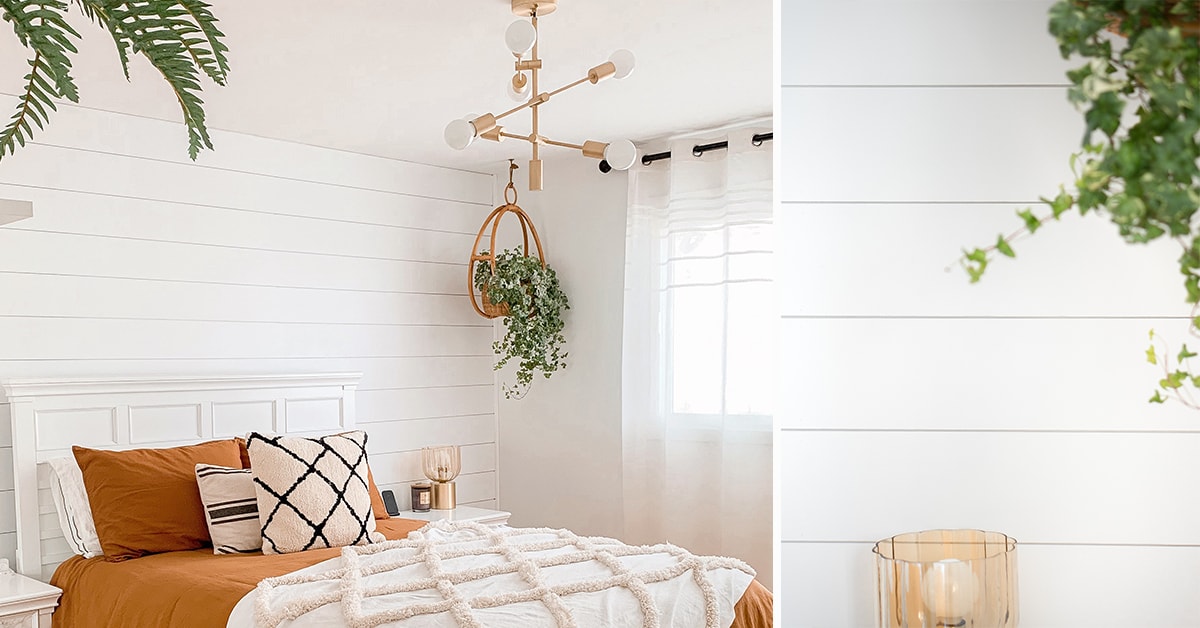 How to build a beadboard wall

Break out of the mold

with our selection of mouldings