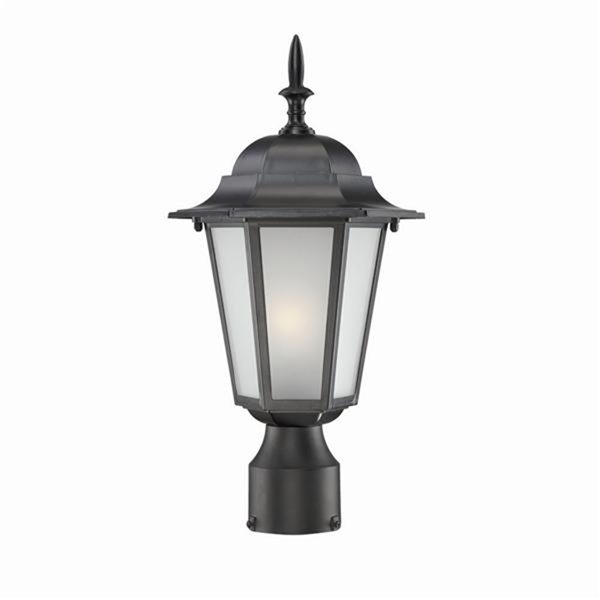 This item is not currently available for immediate purchase, but can be ordered by visiting the selected store.
Acclaim Lighting Camelot 1-Light Post-Mounted Black Lantern with Frosted Glass

The Camelot collection 1-light post-mounted lantern is made of durable cast aluminum. This material is a good choice for exterior lighting since it does not rust and resists corrosion. Complementing its clean design, this lantern features frosted glass panes. 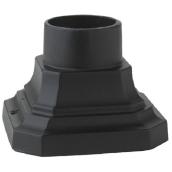 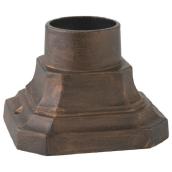 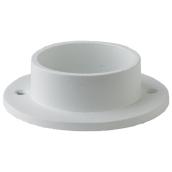 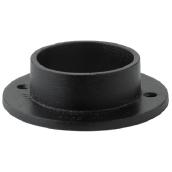 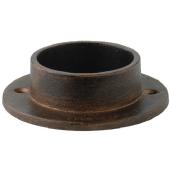 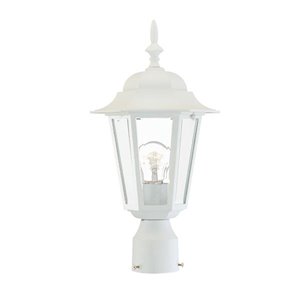 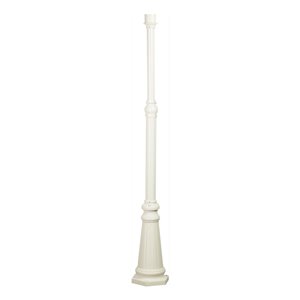 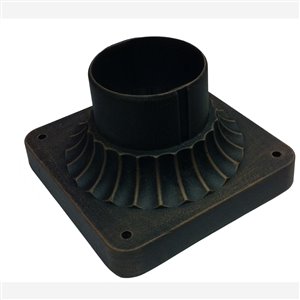 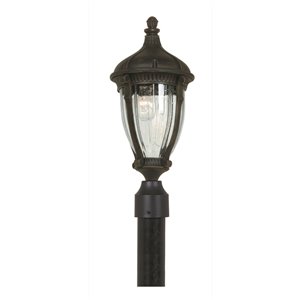 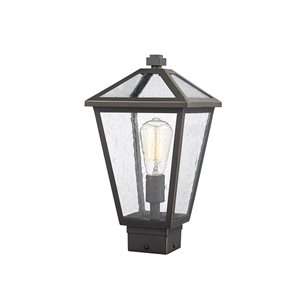 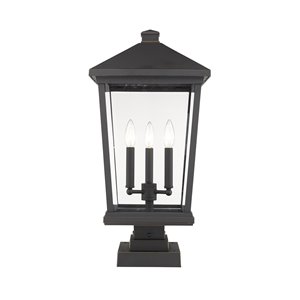 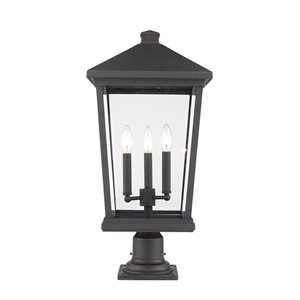 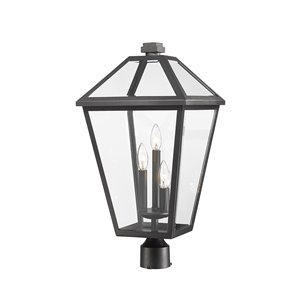 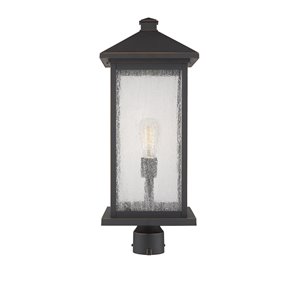 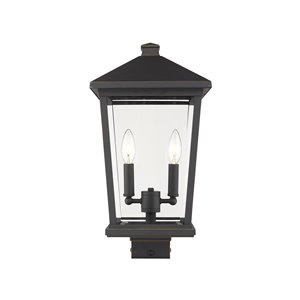 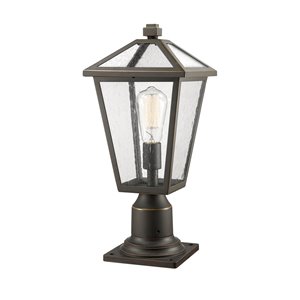 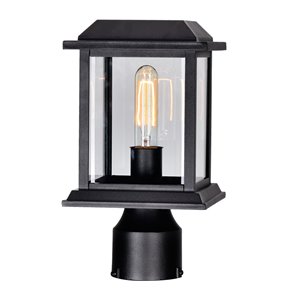 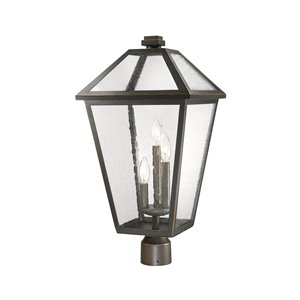 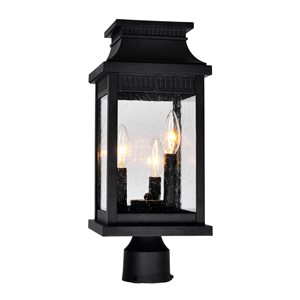 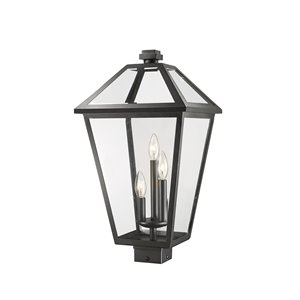 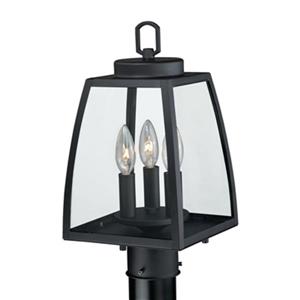 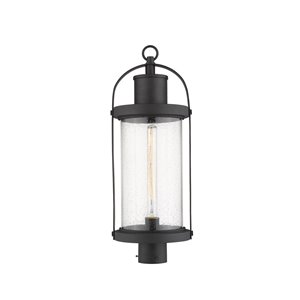 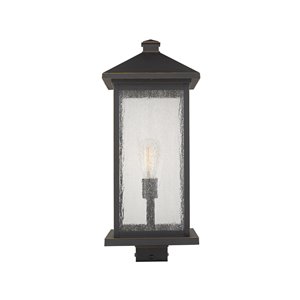 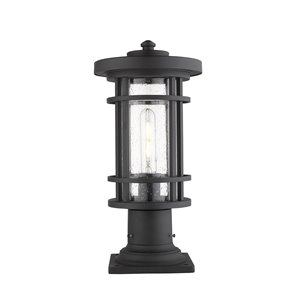 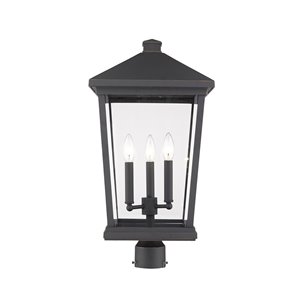 Z-LITE
Z-Lite Beacon 3 Light Outdoor Post Mountable Fixture - 12-in x 23.5-in - Rubbed Bronze/Clear Glass
★★★★★ ★★★★★
0
(0)
Details
Article #330738282
Acclaim Lighting Camelot 1-Light Post-Mounted Black Lantern with Frosted Glass is rated 3.5 out of 5 by 2.
Rated 2 out of 5 by Frank from Impossible to assemble lamp with supplied hardware Photo1 shows two fasteners supplied with the product. These are meant to pass through a hole in the body of the lamp where they then screw into threaded holes in the top cover. Each fastener is actually 2 separate parts, a threaded stud and a black decorative nut. They have metric threads. Photo2 shows me holding a fastener tightly in the hole of the body. The problem is that the threads on these fasteners are way too short. The threads aren't even long enough to pass through the hole, not to mention having enough threads sticking out of the hole to screw into the threaded holes in the top cover. A week after sending photos to service@acclaim-lighting.com I received replacements in the mail, but they were too long, see Photo3. It shows the assembled lamp with the fastener tightened all the way into the top cover. I wrote again, received another shipment, but still none of them fit. In the end I had to grind down the studs to fit properly. My advice for anyone purchasing this lamp is to open the box at Lowes and measure the hardware. Screw the stud all the way into the decorative nut, and measure the remaining stud that's sticking out of the nut. It should be 7/16" for a proper fit. If it's longer the stud will bottom inside the top cover's screw hole and the cover will fit loosely & wobble, wind driven rain could enter the lamp. If it's too short you risk stripping the first few threads in the aluminum screw hole, it's only 5 threads deep. I would also suggest applying Loctite thread lock where the stud screws into the nut. When you go to replace the bulbin the future, you'll want the nut & stud to come out as 1 piece, otherwise only the small & slippery decorative nut will come off. It's too easy to drop & lose, especially if the lamp is surrounded by grass or foliage.
[Product page bottom promo box]
[FooterCatfishTop]
Buy online
fast and easy
Learn more
Hesitating?
Our return policy is simple,
learn about it!